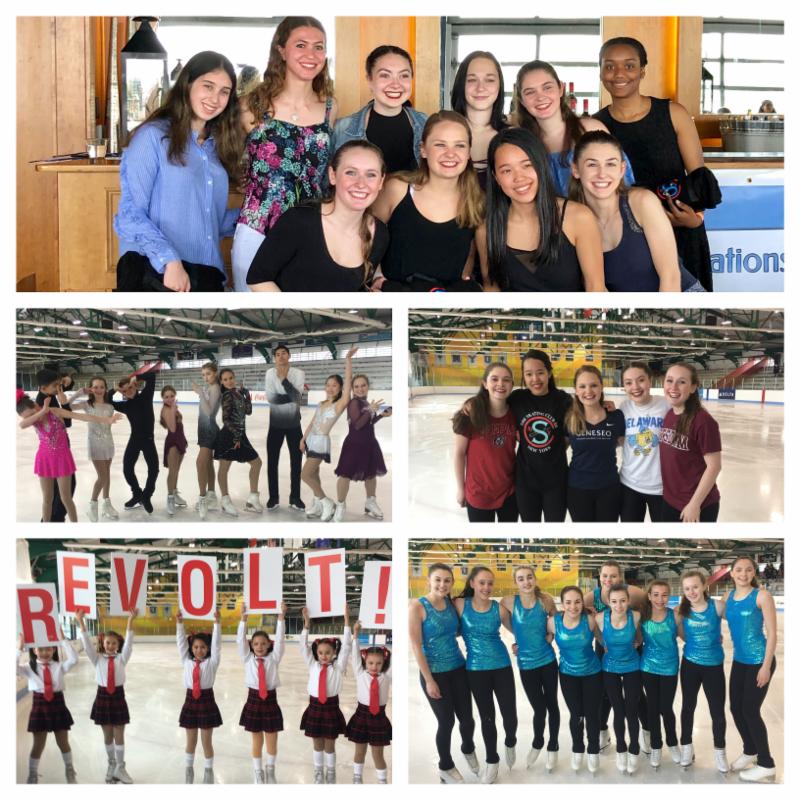 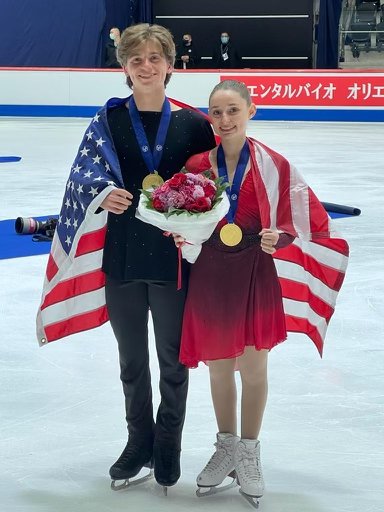 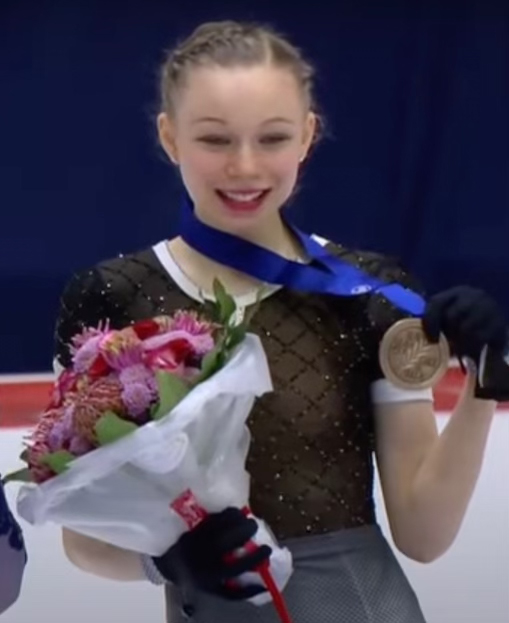 In the ice dance competition, the Browns became world champions, leading an American contingent which saw all three U.S. teams finish in the top seven. After setting a personal best in the rhythm dance on Friday, the Browns extended their lead, setting new personal bests in the free dance and total score, shattering their previous personal best by more than 15 points with a combined 170.25. Skating to "Exogenesis: Symphony, Part 1: Overture" and "I Belong to You (+Mon coeur s'ouvre a ta voix)" by Muse, the three-time U.S. junior medalists won the free dance with 103.27 points.

Lindsay Thorngren set international personal bests in both her free skate and total score.Performing to music from Queen's Gambit arranged by Cédric Tours, the 2020 U.S. junior champion nearly hit 200 points with 199.42, including 133.28 in her free skate, receiving a positive grade of execution on every element and earning all Level 4s.

Anastasiia Smirnova and her partner Danil Siianytsia (All Year FSC), won the bronze small medal in the short program at Junior Worlds and finished fourth in the Pairs event. 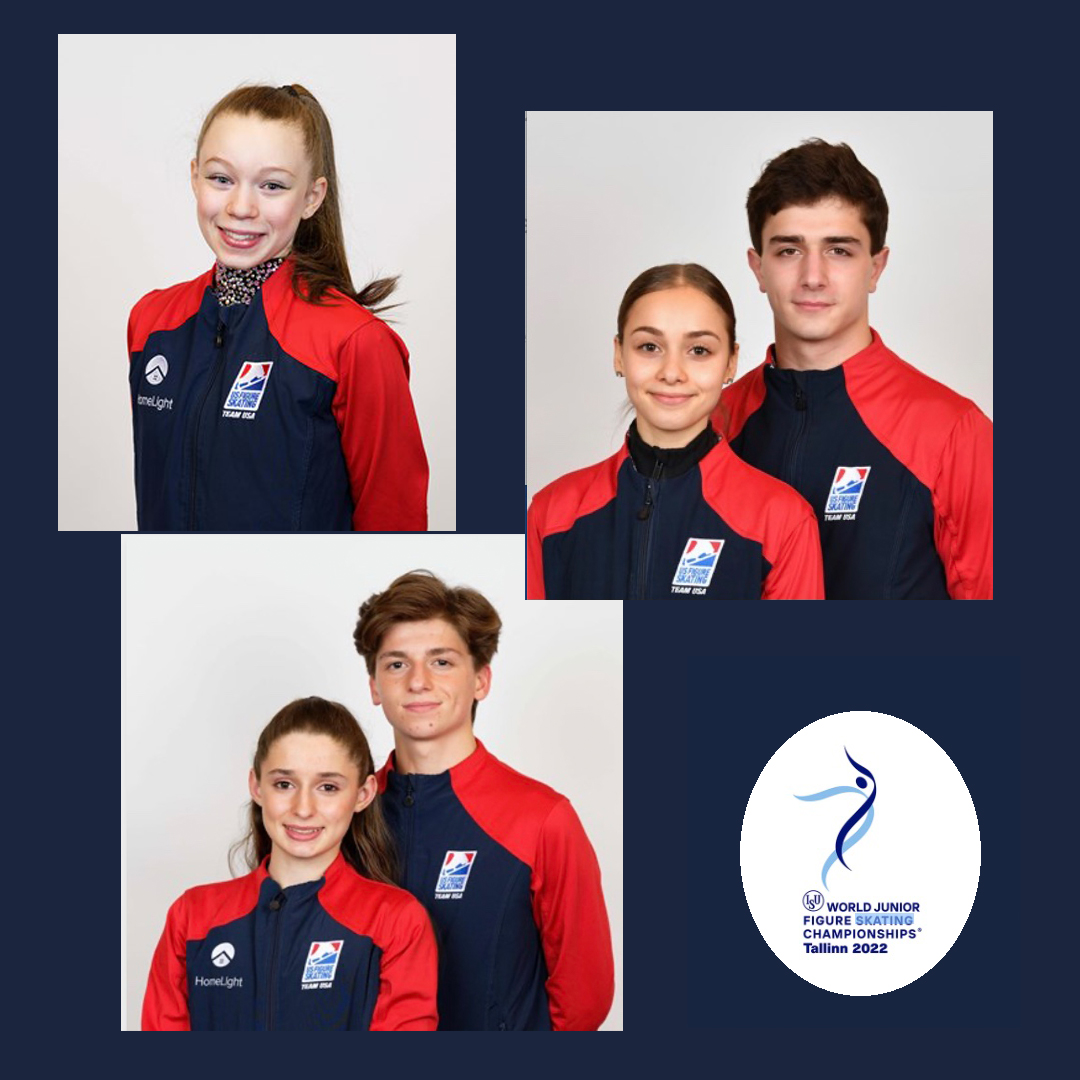 Congratulations to all of our Adult Skaters who competed at the 2022 US Adult Eastern Sectionals last weekend in PA. We are so proud of all of you and your hard work and dedication to the sport.
Good luck and happy training to all of those heading to the Adult Championships next month! 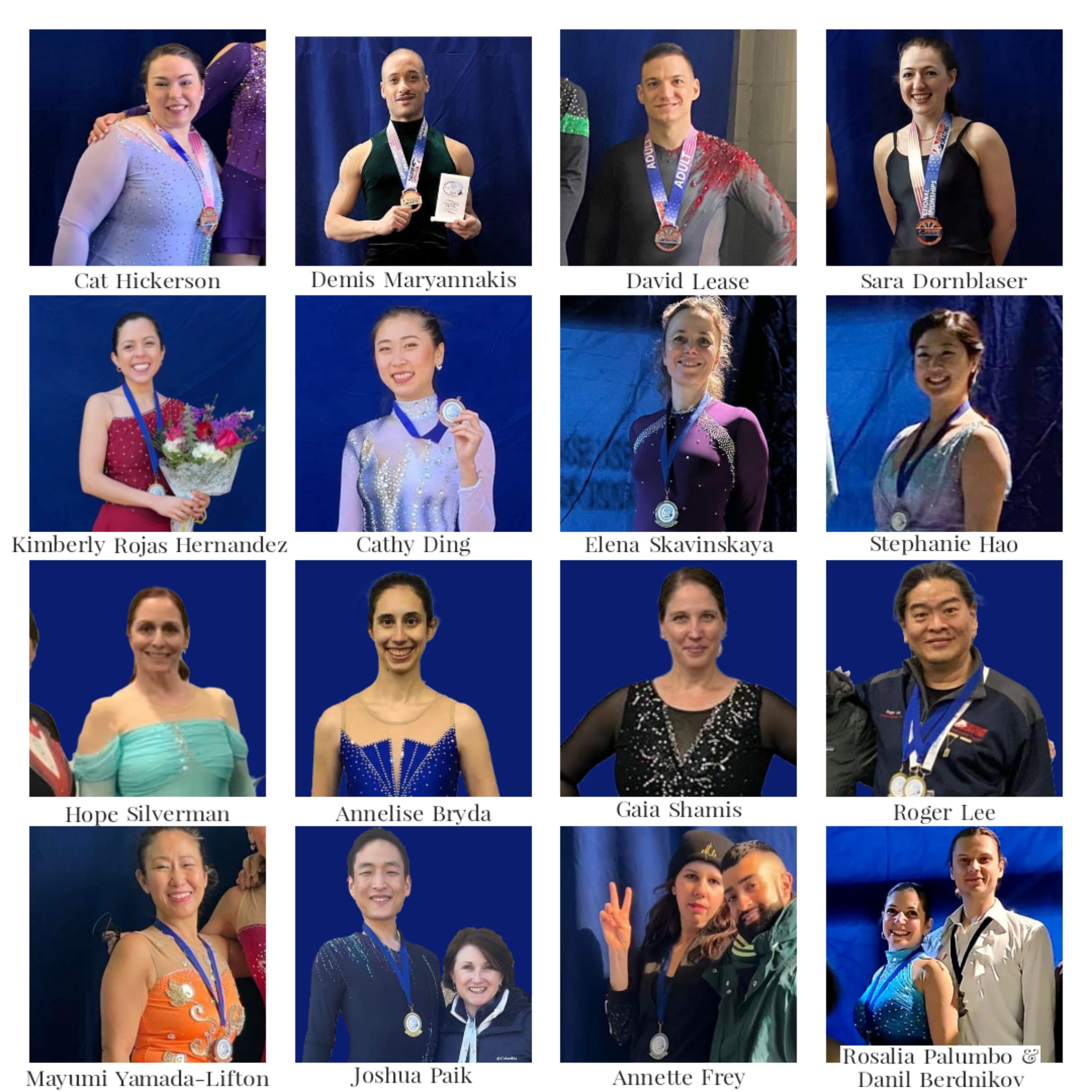 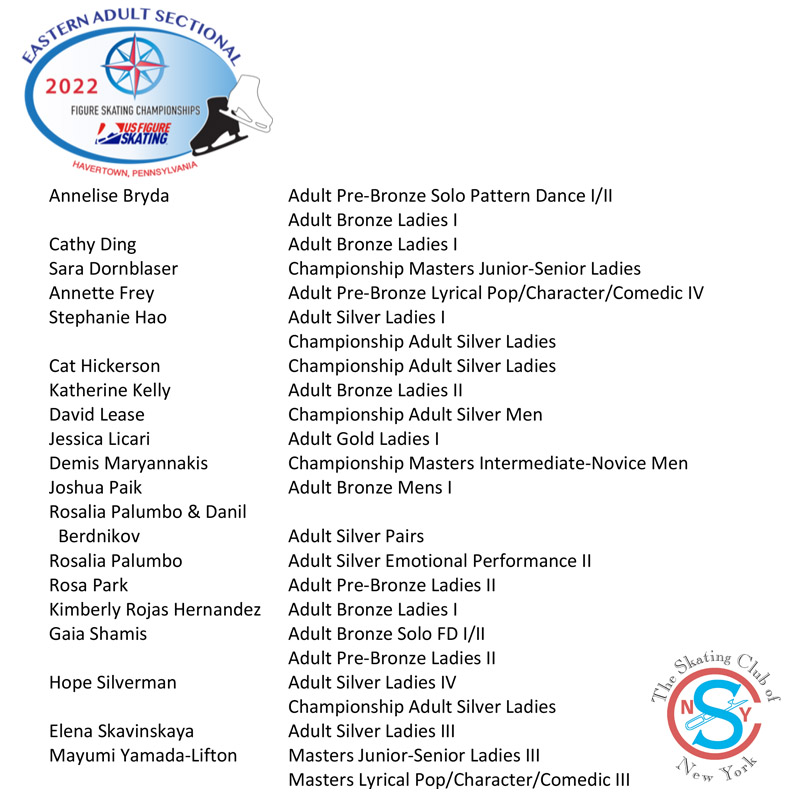 Good Luck to our Skaters at the 2022 Olympic Games 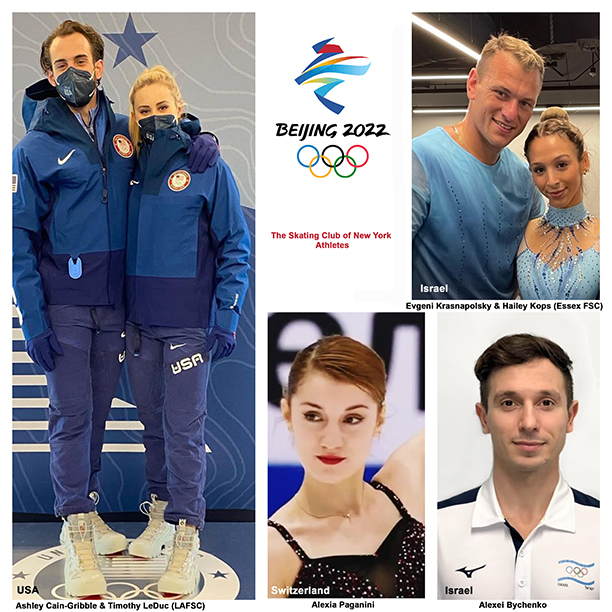 The XXIV Olympic Winter Games will take place from February 4th to 20th in Beijing. Four SCNY athletes will be participating.

Representing the United States are Ashley Cain-Gribble and her partner Timothy LeDuc (LAFSC).
Representing Israel in the Men's event is Alexei Bychenko and in the Pairs event Evgeni Krasnopolski and his partner Hailey Kops.
Alexia Paganini is representing Switzerland in the Women's. Good Luck Team USA, Team Israel and Team Switzerland!

Congratulations to all our National Championship skaters! 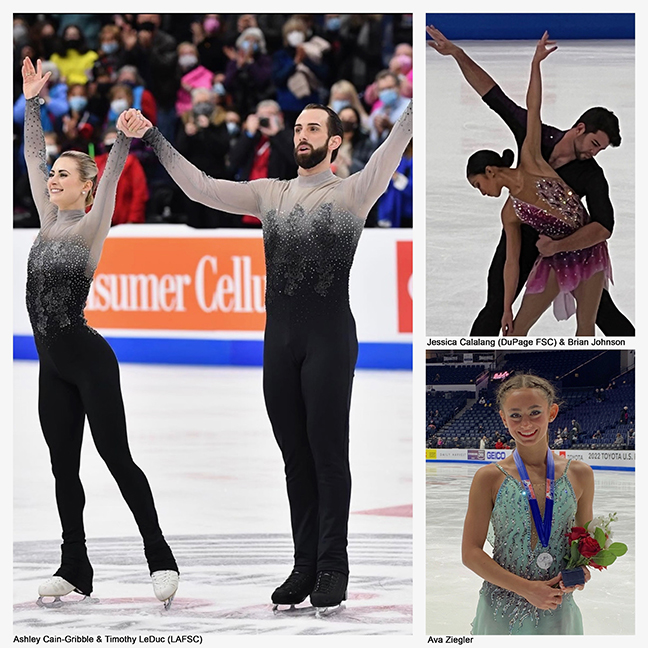 The 2022 Toyota U.S. Figure Skating Championships concluded January 9th at the Bridgestone Arena in Nashville, Tennessee. Eighteen SCNY members and associate members competed at the junior and senior level. Congratulations, all participants. We are so proud of ALL of you! Here is a recap of the results and the International assignments:

Lucy Brennan Elected to the US Figure Skating Hall of Fame 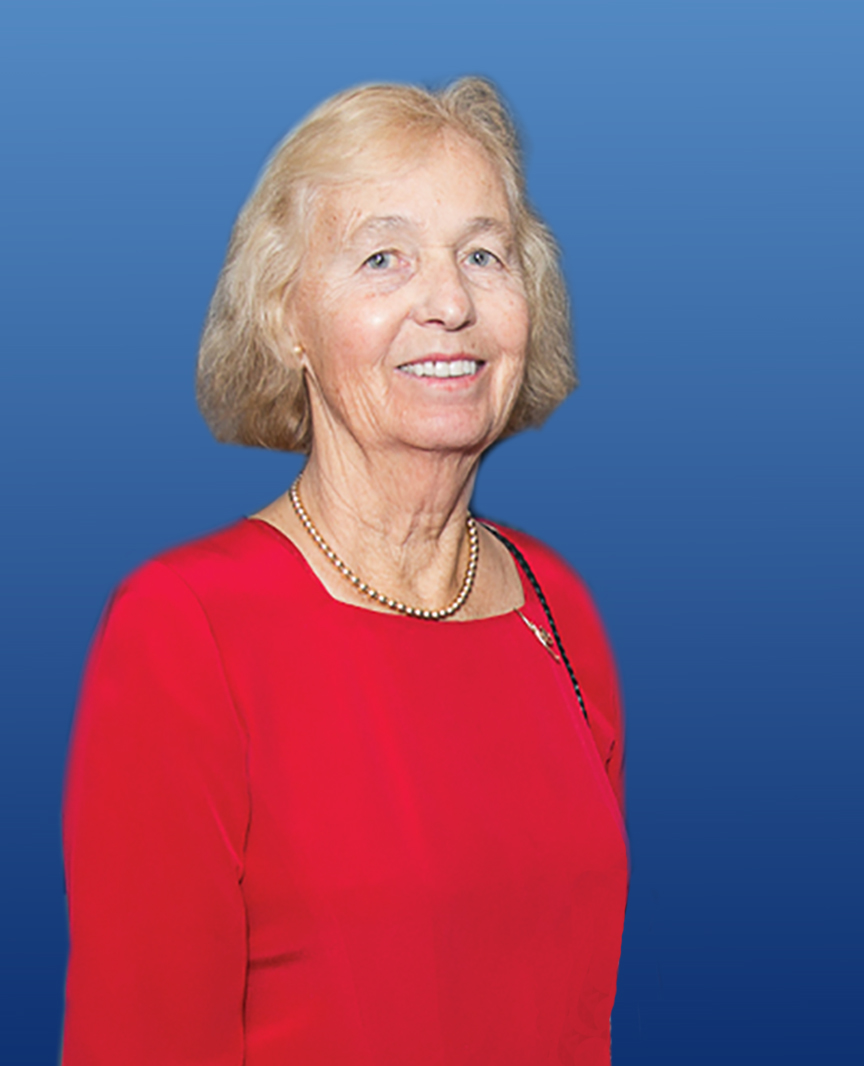 Congratulations to SCNY member and two-time Olympic judge Lucy Joyce Brennan on being elected to the US Figure Skating Hall of Fame! The induction ceremony is at the US National Championships in Nashville January 9th. A well deserved honor!

With more than 60 years of service as an official, Lucy Joyce Brennan has judged and refereed at multiple Olympics, World Championships, World Junior Championships and other major ISU events. She has received numerous awards, including the 2006 ISU Gold Award of Merit. She judged at the 1988 Calgary Olympic Games (ladies) and 2002 Salt Lake City Oympic Games (pairs). She is the first American woman to serve as an ISU championship referee in singles and pairs. Mrs. Brennan, a longtime member of The Skating Club of New York, has also served as the chief referee at the 2001 U.S. Championships and is the long-time chief referee of SCNY's Middle Atlantic Figure Skating Championships..

Congratulations to our Medalists at the 2022 Championship Series Events

Due to the ongoing impact of COVID-19, the 2022 U.S. Figure Skating Championship Series is being for the 2021-22 season as part of the . The series of eight competitions replaces the traditional U.S. Qualifying Season competitions. Advancement to Nationals will be based on each skaters’ highest score earned rather than placement at each competition and the approved advancement criteria can be found here. Qualification to the National High Performance Development Team will also be based on highest score and additional details can be found within the series handbook.

The following are the results of the competitions in which SCNY skaters medaled: